Newcastle United vs. Everton: How will we line-up? 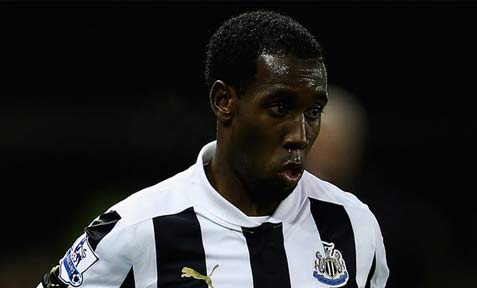 First and foremost, a very Happy New Year to all of you, let's hope it proves a fruitful one.

A pretty ridiculous Christmas period has come to an end, and the cold hard truth is that Newcastle United need to start 2013 with a handful of wins to guarantee a respectable Premier League finish. Our trip to Manchester reminded me of something in 2002, when NUFC were in touching distance of Manchester United and an actual threat to Alex Ferguson's side. The game had everything, and goals aplenty. Needless to say, United scraped a win in the dying seconds courtesy of the poaching Mexican, Hernandez. Even though we lost the game in the dying moments, it was a sterling effort from the lads. On another day, we would have won that game - Sylvain & Sammy's efforts both hitting the woodwork at a stage when another goal for us would have most certainly taken the wind out of United's sails.

Our trip to the capital resulted in the same story - we controlled the game, scored a bucket-load of goals but still continue to disguise our back four as a sieve. 7 goals conceded is a tad unacceptable, but it was never a four goal hammering, far from it.

Indeed, while stats aren't always very reliable, they are statistical facts and the numbers recorded in the Arsenal game were nothing less than staggering.

We had 56% of the possession for the entire game; played 108 more passes than Arsenal, and had a 89% passing completion rate for the 90 minutes. With a fully fit squad, and a new RB we would have won that game, I have no doubt.

There are quite a lot of positives to take from our two duels with AFC & MUFC, and some people might be missing them due the frantic scorelines.

Compare our passages of play away at Old Trafford/Emirates to that of our efforts away at Stoke, or at home to West Ham/Swansea. We are a much better passing outfit now and tend to keep the ball on the deck rather than hoof it long. The results of such a passing movement? Scoring 7 goals in two games with an under-strength & fatigued team.

Less about last year however, and more about our fixture against a dangerous Everton side tomorrow.

I think the rest we've had will suffice, and the lads should be able to defeat this Everton side, even with Fellaini back in the side.

The question is, how will we line-up? Below is how I think we'll shape up at some stage of the game, whether or not that will be our starting structure or not we'll have to wait and see. 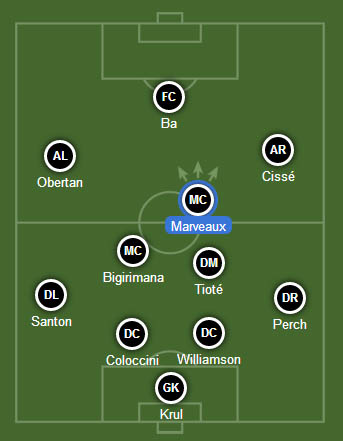 As you might have noticed, my last article on the site highlighted why we can't allow Sylvain Marveaux to leave as part of any deal for Loic Remy. The article was written on the 19th of December, before our Christmas fixtures. Hopefully a lot of you will have seen precisely why he can't leave. He has brilliant vision, a neat pass, and the ability to crack defences open at will. Look at him away at Arsenal, a goal and a phenomenal assist with the outside of his left-foot for Ba's equaliser.

Above, is where I think we will see Marveaux drift as the game progresses. In a more central position he has the ability to dictate the pace of a game and spearhead attacks. With Cheick and Gael behind him cleaning up, it is more than a platform to secure an important three points.

Obviously we are without Simpson due to his broken toe, so Perch is likely to fill in, either that, or Santon will switch to RB and allow Ferguson to play as left full-back. I'm of the opinion that Anita won't play a part in the game, but that could well change from now until 8pm tomorrow.

The only worry I have is our defending from set-pieces. Our defenders need to be on their game to stop any potential threat of Fellaini, Jelavic or Anichebe. If we can keep those guys quiet then we've a great chance of 3 points. Baines down the left will need tight marking as well, but being honest, I'd be more comfortable with Perch marking him then Danny Simpson.

All in all, I think we will win. Perhaps a few goals from Demba before his seemingly imminent departure?

Either way, get Sylvain Marveaux on the ball and let him do the rest.

Also, if you're not following @TyneTime on Twitter, do so. Feel free to follow me, the man behind the operation, @KevinDoocey.