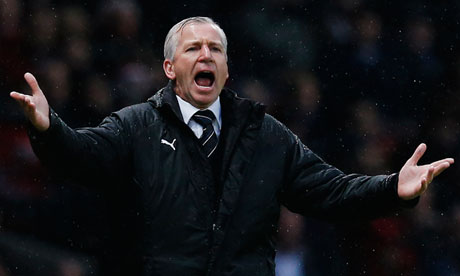 When Newcastle United began the 2012/13 Premier League campaign, the world ‘relegation’ would not have existed in the same sentence. As we near the half way mark of January 2013, every single tabloid, broadsheet and blog is talking about the real possibility of Newcastle United finding themselves in the bottom three of the Premier League come May. With Demba Ba - NUFC's leading goalscorer - departing for Chelsea, and the well documented unhappiness of captain Fabricio Coloccini all coming to the fore at the start of the New Year, Alan Pardew has a job on his hands and just about enough time to do it. The real question that occupies the mind of every Newcastle United fan is what transfer budget Pardew has at his disposal to weld together a side that can pick up enough points to secure NUFC's fate.

The answer to that question is unknown, but rumoured to be in the region of £20m, before the signing of Mathieu Debuchy.

You have to credit the board and the staff for sealing a deal for Debuchy so early on, and while he perhaps should have been a Magpie since August, they have managed to secure extremely good value in their £5m outlay. With Danny Simpson recovering from a broken toe, Debuchy's arrival marks a very important period for Newcastle United as a club.

One would have to think Derek Llambias and his team are in the market for three more players before now and the end of the month, and surely two of those are ball playing centre backs? Coloccini looks as if he will leave be it this month or in the summer, and quite frankly, we need support in those areas anyway.

James Tomkins has been linked but will not arrive. West Ham have no intention of selling, and although Alan Pardew is a long-term admirer of the 24 year-old; he is not on the list of potential January recruits. Saying that, this list seemingly changes each and every day.

Douglas of FC Twente and Mapou Yanga-Mbiwa of Montpellier are more realistic prospects and rated very highly by Graham Carr. It would be terribly surprising if an attempt to prise Douglas did not materialise, but only time is an honest teller.

What annoys me however, is the the constant plea for support by Alan Pardew before each and every game. He asks the fans for patience, understanding, and a supportive attitude. As every English football fans knows, Newcastle United fans are the most loyal in the Premier League and will support their team through thick and thin.

This is what makes Newcastle United such a special club.

Support for the lads is a given regardless of how they are playing, and Pardew need not ask for this. What he does need to do though, is work extensively on the training ground to improve our defending and attacking of setpieces. He needs to organise movement during those set pieces, and more importantly, he needs to make it extremely clear to the players that our threat from deadball situations has been nothing less than atrocious. I wrote a piece on this very matter way back, after our 1-1 draw at home to Aston Villa.

Nothing has improved, and tomorrow NUFC are up against a team that are potent from such situations. Last season Steve Morison and Grant Holt destroyed a makeshift back four that saw Danny Simpson play centre-back with James Perch if I remember correctly. Robert Snodgrass freekicks, and corners could be the difference between us getting a result, and heading back to Tyneside empty handed.

We know Pardew is passionate, but it is time for him to get this across to the players. It is time that the players understand that they are in a perilous situation and it's imperative that they know 100% will be required from now until the 40 point mark is reached.

Realistically, NUFC are not going to be relegated this season, but we want to see that proven true as soon as possible. It is a much different side to that of 2009, and there are quite a lot of teams worse than us in this division, but I for one do not want our Premier League fate coming down to the final day of the season.

Three signings, productive training sessions, and a hard look at themselves. This should suffice in keeping NUFC in the most entertaining division in the world.

The least the players can do is match our passion, on the pitch..