Newcastle United & corners: Where it’s all going wrong and how to fix it 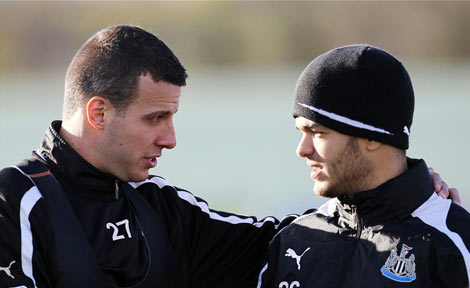 Newcastle United's delivery from corners has become something of a joke. As we highlighted after our 1-1 draw with Aston Villa on the 2nd of September (just three games into the EPL season). Still, we are in the first week of January 2013, and Newcastle United are yet to still pose any decent threat from a corner. Yesterday's defeat to Swansea was a bitter pill to swallow considering we were much the better side overall, and controlled possession for the majority of the game which deserves credit, however, this article is not going to discuss our defeat to Swansea, you can find plenty of match reports out there. Below, I will be hoping to highlight where NUFC are going wrong when it comes to taking corners, and offer a simple solution towards fixing this. Most other teams in the league have notched up a few goals from corners this season so far, but to my knowledge Alan Pardew's men have not managed a single goal from that particular set-piece.

The last time we scored from a corner?

Perhaps my memory is somewhat hampered, but the last time I can remember us actually scoring directly from a corner was in our 1-2 win away Wolves. You can watch a video of it here, just skip to 1.09. Without sounding like an absolute moaner, the delivery for that goal was not exactly text book stuff either. However, the movement of Demba Ba, the position of Steven Taylor and indeed the hesitancy of their keeper meant it worked out perfect for us in the end.

Where are we going wrong?

A simple question, with a simple answer. But, one would think Alan Pardew and his coaching setup would have managed to fix the very basics of our corner downfall? Apparently not, because our corners since that Villa fixture have been absolutely terrible.

If I was to attribute our current corner demise to two particular aspects, it would be the following:

1. Positioning and setup of defence

You will often see Steven Taylor and Fabricio Coloccini exchanging words before the corner is taken as if they're planning an absolutely perfect routine. Taylor tends to make a run into the centre, while Coloccini often drifts towards the edges of the area where he lobs any rebound, back into the box.

In recent times, as we saw against Swansea City yesterday, the corner was aimed towards the far edge of the area where I think Steven Taylor met it with a looping header back into the area, which was eventually cleared.

Now, why on earth would you aim for the distant area that is the edge of the box? Unless you have someone who flicks it down to an oncoming midfielder who is lurking outside the area all the while and he thumps one towards goal, then it's a pretty useless tactic.

What we tried yesterday (and excuse the art, it was a quick mock-up!)

What we should try, and train with:

I'm not sure about you, but it infuriates me to see Yohan Cabaye go to take corners on the right hand side when a left-footed player is craved. Yesterday, you would have noticed that Cabaye actually kicked one out of play before it came back onto the field which pretty much summed our corner endeavours throughout the season so far.

Now, to be fair, the one defence I would give Alan Pardew and the team regards corners is the fact that our two best corner takers are probably injured at the moment, Hatem Ben Arfa and Ryan Taylor. Ben Arfa can deliver beauties with his left peg and situation like the above would have suited him much more than Cabaye. Saying that, the movement and plan of our defenders is crucial in achieving a successful corner, and we've failed to cause any damage in that department as I have touched on.

It should be a simple as this - Taylor/Cabaye takes the corners on the right, Ben Arfa/Marveaux taken the on the left.

Have Steven Taylor attack the near post and prepare for the eventuality that Tayls might misdirect, and skew his effort off target. If so, have the likes of Davide Santon lurking on the six yard box/far post area to help in any stray balls.

Of course all of that is ideal, and does not entirely account for towering centre defenders busting their gut to get to the ball, but we need to try and up our game. Corners have failed us this season. Free-kicks have improved drastically since Cabaye's arrival, and our defending of corners is not that bad in all fairness. Attacking corners is a different matter however.

The most sickening thing about it all is the fact Pardew said a few months ago that he was recruiting a corners coach to help his team out with that area. Did the guy miss his flight or what? Nothing has improved on that side of things.

We are not entering a season where corners could be the difference between us securing a scrappy three points away from home. Just keep an eye out how many goals are scored from corners, directly or indirectly when it comes to the team in the bottom three..

Comments welcome, what can we do to fix this mess?