An honest review of Southampton’s victory over toothless Toon 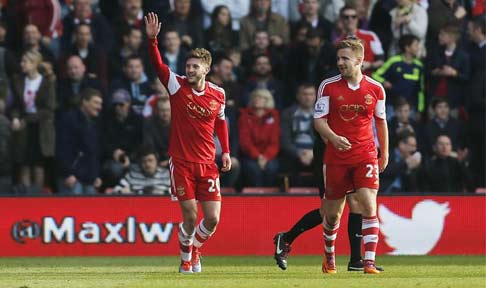 There may have been only a solitary point separating Newcastle United and Southampton in favour of the North East outfit before today, but when the final whistle sounded at a packed out St. Mary's Stadium - there might as well have been a division between the sides, as the difference in quality on display was truly visible. Southampton have earned the plaudits for their style of football this season, and as I alluded to in my preview on Friday evening, Newcastle needed to be on song in order to avoid another away defeat. I suggested that we couldn't allow Southampton to start quickly, or force us deep into our own half so early on, but dear me, that was exactly what happened. Whatever about us falling into Southampton's trap, the response was even more disheartening for the 2100 loyal Newcastle United fans that made the long journey down to Hampshire.

Admittedly, my predicted line-up was slightly different to the team Alan Pardew named as his starting eleven. Massadio Haidara was given the nod ahead of Paul Dummett, while Luuk de Jong made way for the maverick that is Hatem Ben Arfa.

Most fans were encouraged by the formation on display as it showed attacking intent, but I must say when I saw that Hatem was starting, it disappointed me a little.

Ben Arfa is at his best when he comes on with a half-hour left on the clock. He eyes up his opportunities on the right hand side and uses his skill and agility to beat a tired left-back. Starting him from the off against an energetic Luke Shaw not only withdrew the chance of him impacting a game late-on, but it also meant that we had no Plan B should his employment on the right not work out.

It was hardly surprising when Ben Arfa had little time or space on the ball during the game and was eventually substituted at half-time (ridiculous!) for de Jong. Some will say it was a gamble that failed to come off on Alan Pardew's part, but it was a pretty naive move from the first whistle.

We reverted to a 4-4-2 for the second half which not only invited more pressure from Southampton but also gave the side no options going forward with a lumbering Luuk de Jong and Papiss Cissé working to different manifestos in front of Vurnon Anita who was seemingly handed the duty of creating chances - another farcical aspect to today's showing.

While most of the focus of today's game would have been on the performance of referee Andre Marriner, Mapou Yanga-Mbiwa and his counterparts in defence must have been engrossed by his presence as well. Mapou - playing at right-back (not his natural position) was caught out time and time again and seemed completely out of his depth.

The decision to constantly play a high-line and attempt to play a pacy Southampton offside proved toxic, yet it didn't prevent them from making the same mistake for Rickie Lambert's goal. Ultimately, it was a dismal defensive showing from the team despite the best efforts of the ever-present Fabricio Coloccini.

Conclusion - what did we learn about NUFC today?

Unfortunately the only thing I learned was that the majority of the squad is already on holidays. Fair enough Southampton were pretty excellent in their own right but we made life easy for them. The fast start that I warned against materialised, and by right, the Saints should have been at least 3-0 up at half-time.

We offered no offensive threat whatsoever with just two shots on target for the entire game. The only positive to take from today's tie was the performance of Rob Elliot in the Newcastle goal. The Irishman - playing his first game of the season - looked unbeatable until first half injury time, and despite that he continued to pull off some fine reaction saves in the second period.

Despondent, disappointing, disgraceful and downright dire — that is how I sum up Newcastle's display against Mauricio Pochettino's men today.

What do you think? Comments welcomed as always 🙂