Newcastle United should be rivalling QPR for Steven Caulker 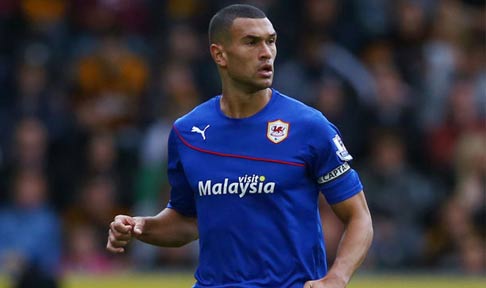 There is no doubt that the valuation of young England players with minimal Premier League experience has become somewhat of a joke in recent years. Luke Shaw - a fantastic talent with a huge future ahead of him no doubt - left Southampton for Manchester United in a £34m move, after just one season of proper Premier League football. Adam Lallana's £25m price-tag which saw him join Liverpool has also been questioned by others, and although another very talented player, their respective costs are at least double their true value in a fair transfer market. However, while the world has gone mad with excessive transfer fee, one Englishman, by the name of Steven Caulker, seems set for a £9m move to newly promoted outfit Queens Park Rangers following Cardiff's relegation from the Premier League.

This is one deal that I feel represents true value for money. He was one of Cardiff's shining lights in a woeful season in Wales, and it surprises me, even disappoints me, to see that no other club seems to be challenging Harry Redknapp for the England capped defender.

Before the Premier League campaign ended last season I wrote of how I thought Newcastle should make a move for Caulker. Powerful in the air, dominant at the back and with real influence among a back four - Newcastle need to prepare for the inevitable departure of Fabricio Coloccini, and although different mould of players - Caulker could become a steadfast member of the Toon team by learning from the Argentine.

What is even more disappointing is the reports in June that Newcastle were indeed offered the chance of sign him after Cardiff's relegation and have not acted on it, despite the enticing price of £8m. According to the local media, Newcastle had Caulker shortlisted should Mapou Yanga-Mbiwa depart the club, however, there is has been no movement with the Frenchman, thankfully.

Saying that, while I want Mapou to stay, that should in no way stop us from recruiting another defender, sadly however, Newcastle seem to operate with the ‘1 in, 1 out’ transfer model - although it has often ended up with one out, and no replacement!

No offence to Queens Park Rangers, but Caulker could gain a starting role with a top club in the Premier League, certainly a side in the Top 10. He is better than Mike Williamson, superior to Steven Taylor, and at the moment in time - more impressive than Mapou. He is also just 22 with a huge future ahead of him.

At such a young age and seemingly fitting our recruitment policy so well - it does not make sense to see him make a move to a newly promoted outfit when he is the perfect addition to Alan Pardew's side.

Comments welcome as ever 🙂